quality vs money? The Decline of RuPaul’s Drag Race 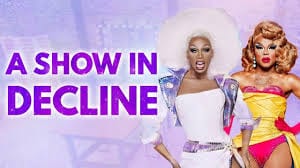 Over the past four or five years, the world has slowly discovered a phenomenon known as, RuPaul’s Drag Race. A competition reality series hosted by drag queen, RuPaul, that involves drag queens from around the country competing for a cash prize and the title “America’s Next Drag Superstar.” The show has been broadcast since 2009, originally on the LGBT network, Logo, however it began simulcasting with VH1 in 2016 with it’s second “All-Stars” season. This proved to be a ratings juggernaut for VH1, and RuPaul won the 2016 Emmy for “Best Host” during the season’s airing. “Drag Race” and their production company decided to capitalize on this and exclusively moved to VH1 in 2017 with it’s ninth regular season.

The show now airs around two seasons a year, one with newcomers and one with “All-Stars,” and are about to wrap up their eleventh regular season with its reunion and finale over the next two weeks. In addition, drag queens from the show have appeared on other VH1 programs like “Scared Famous,” and  “America’s Next Top Model.” Some have even earned their own shows, like Season 5 and All-Stars 2 contestant, Alyssa Edwards, who has a docu-series on Netflix about her life.

While “Drag Race” is successful and making money, many fans believe there is a decline in quality from the earlier Logo seasons.

Fans have accused the show and producers of putting emphasis on “shock value” and “unexpected” or “controversial” things, rather than simply making “rational decisions.” Fans have noticed an increase in twists and surprising decisions since the move to VH1.

When it was on Logo, “Drag Race” was harder to access, and the show could get away with more jokes and racier material. The show also served to educate people on LGBT history, with the season 4 episode “Float Your Boat” featuring a discussion about the Stonewall riots and the importance of the pride flag and parades.

One of the reasons for the show’s growing mainstream success was through the spread of the Internet. When someone simply rolls their eyes in front of a camera, social media makes it into a meme, and it goes viral, even making people be unsure where it came from. So eventually people will ask and find out, and might check the show out for themselves. This lead to many people falling in love with the show, and producers looking for a way to appeal to more demographics.

The problem with broadcasting on Logo was the channel’s lack of availability. Not everyone’s cable package or satellite dish comes with Logo. So when the demand began to increase, and with the series second “All-stars” season coming up, the first in four years, the producers were looking for ways to make it more accessible. Hence, VH1.

Since the move to VH1, “Drag Race” has enjoyed steadily high readings. Contestants have become household names and have enjoyed several opportunities. A-List celebrities are now watching the show, like Lady Gaga and Kacey Musgraves, and are guest judging the show and giving contestants opportunities.

With eleven seasons, and several all-stars seasons, any show would naturally start to go downhill. To avoid repeating the same thing over and over again, producers have to come up with some changes to the format. Unfortunately, these changes have mostly angered fans. An example was season nine’s change to the finale, which changed it from just a live reunion with the winner being picked, but added another challenge. This caused the perceived frontrunner to be eliminated in third place. Another twist that angered fans was having the eliminated queens choose the top two contestants in the third all-stars season, which again caused the perceived frontrunner to be out of the running.

Some fans have ignored the anger, saying that the show has provided iconic moments and likeable queens. Fans have also applauded the show for finding contestants who are different and who have been sharing their unique perspectives and experiences on issues.

What do we do now?

“Drag Race” is a unique reality competition show in that it has gotten more popular as it has aged. It’s the reverse “American Idol” effect. This might be the reason for the risk taking, the producers feel like they need to keep all their fanbases entertained, and can’t let anyone get bored.